Red Shirts (And Swimsuits?) Found Not So Harmful 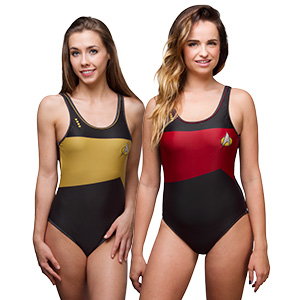 This of course led to the predictable caveat about not wearing the red one, so it was with no small amount of glee I came across a Royal Statistical Society paper in Significance magazine debunking the old belief that red shirt = death in any flavor of Trek.


According to the Joseph’s Star Trek Blueprints, the only set of Enterprise blueprints endorsed by Paramount Pictures, the Enterprise’s 430 crew members consisted of 55 command and helm personnel, 136 science and medical personnel and 239 engineering, operations and security personnel. This means 16.4% of casualties were in command and helm, 5.4% were in science and medical and 10.0% were in operations, engineering and security. Of the remaining 27.3% of casualties, 12 were killed by contact with the galactic barrier or Rigelian fever, which could have affected personnel regardless of duty assignments.

So, "Based on an analysis of casualties that considers the overall total number of personnel in each color of uniform, wearing a redshirt may not be the automatic death sentence that it is popularly considered to be." However, "redshirts consist of 60.0% of all fatalities where the uniform color is known", with the overall chance of a casualty being in the ship's security detail is 64.5%. Keep your insurance paid up, guys. No word on TNG, though, or swimsuits for that matter.
Posted by Rob at 6:51 AM

Email ThisBlogThis!Share to TwitterShare to FacebookShare to Pinterest
Labels: haha