I stumbled upon this AEI chart on Mark J. Perry's Twitter feed (@Mark_J_Perry): 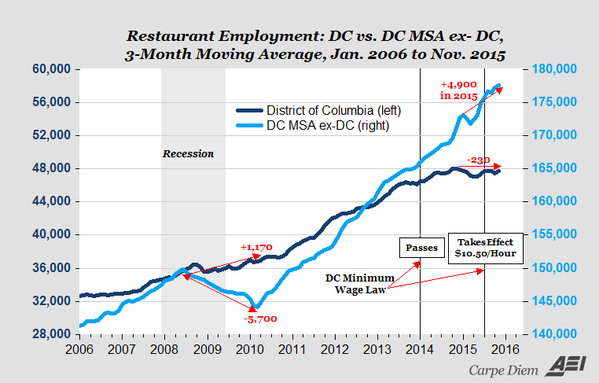 It took some digging, but the full story is available as a blog post at their Carpe Diem site. One of the big issues I see with a lot of research in this area is how it tends to push an agenda one way or another by purposefully changing the goalposts. One example is this tendentious piece from Occupy Democrats, heralding minimum wage job losses as a nothingburger, or Erik Sherman's piece claiming the then-current $11 minimum wage resulted in restaurant employment "soaring". Perry's post goes a fair distance to improving the heat vs. light ratio minimum wage discussions tend to elicit. It's not perfect, but it is a better guide than most. A few observations:

Price Controls, The Next Phase Of Health Care "Reform"

Daily Kos has discovered that Medicare isn't a good gauge of medical spending (this is my shocked face), because Medicare reacts to an entirely different set of stimuli and constraints than private actors:


The research looked not only at Medicare but also at a huge, new database drawn from private-insurance plans—the sorts used by most Americans for health care. And it shows that places that spend less on Medicare do not necessarily spend less on health care over all. Grand Junction, as it happens, is one of the most expensive health care markets in the country for the privately insured—despite its unusually low spending on Medicare.

So the answer (you won't be surprised) is cost controls!


All of this boils down to an idea that isn't at all new: in order to really rein in healthcare costs, providers have to be reined in. Existing anti-trust laws need to be enforced when it comes to hospitals and provider groups with near monopolies, and price regulations could be called for where there are already monopolies.

This is not really surprising, and as with all price controls, will end up having the opposite effect than those its architects envision, i.e. shortages and lines. These lines will appear mainly for expensive procedures, i.e. it will predominantly affect older people needing joint replacement surgery, cancer patients, and so on; young, healthy people, whose needs are occasional and generally inexpensive, won't encounter problems, and thus will claim that these things "work", for some value of that word. The comments are a maze of wishful thinking greasing the slippery slope, as though the obvious, much-heralded government meddling in the medical arena hasn't tainted further actions. (Hint: both houses of Congress are now in the hands of the opposition.) (Hat tip: @phillyrich1.)
Posted by Rob at 4:40 PM No comments:

Revisiting Tinder: The Even Worse News For Unmarried Young Women

David M. Buss in Edge has a thought-provoking essay about the dating crisis among educated young women, something I've treated elsewhere recently. Largely manufactured by women's dating preferences (and a reduction in the number of young men coming out of universities as a fraction of the whole graduate population), he has a take on it that I didn't really appreciate: the nature of male sexuality means such young women face competition from below their own socioeconomic level as well:


Additional elements of the mating mind exacerbate it. A key cause stems from the qualities women seek in committed mateships. Most women are unwilling to settle for men who are less educated, less intelligent, and less professionally successful than they are. The flip side is that men are less exacting on precisely these dimensions, choosing to prioritize, for better or worse, other evolved criteria such as youth and appearance. So the initial sex ratio imbalance among educated groups gets worse for high achieving women. They end up being forced to compete for the limited pool of educated men not just with their more numerous educated rivals, but also with less educated women whom men find desirable on other dimensions.

But wait: Susan Patton's much-smirked-at advice to apply effort to find a husband while one is in college has some sensibility behind it, too? Because,


The depletion of educated men worsens when we add the impacts of age and divorce to the mating matrix. As men age, they desire women who are increasingly younger than they are. Intelligent, educated women may go for a less accomplished partner for a casual fling, but for a committed partner they typically want mates their own age or a few years older, and at least as educated and career-driven. Since education takes time, the sex ratio imbalance gets especially skewed among the highly educated—those who seek advanced degrees to become doctors, lawyers, or professors, or who climb the corporate ladder post-MBA. And because men are more likely than women to remarry following divorce and to marry women increasingly younger than they are—three years at first marriage, five at second, eight at third—the gender-biased mating ratio skews more sharply with increasing age.

Yikes. That's pretty fearsome odds, but on the other hand, one wonders just how much women past a certain point in their lives might want to quit the game altogether, or bat for the other side (i.e. take up lesbianism).
Posted by Rob at 1:33 PM No comments: