How Cheap, Daily Tests Could Stop The Spread Of COVID-19 — If The FDA Will Let Us

Thursday's Episode 640 of This Week In Virology had some astonishing remarks from Michael Mina, who lately has had a paper published advocating that rapid throughput is more important than high sensitivity when it comes to COVID-19 surveillance tests. 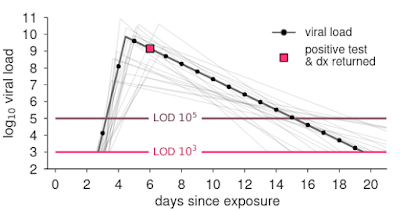 COVID-19 viral load expands rapidly — in a matter of hours — after initial infection.

2. The Window Of Infectiousness Is Brief [EDIT: If Caught Early], Only 2-3 Days In Most Cases 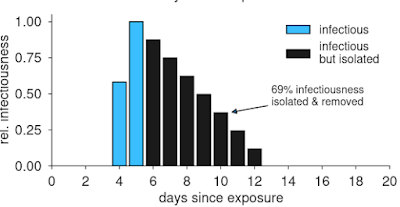 3. High-sensitivity tests are expensive, and have long throughput times.


Early tests from the CDC and WHO were designed to be as sensitive as possible. A large part of this was because it was thought that infection buildup took place over days, and thus the need to capture early, lower viral loads. But because the buildup is so rapid, it avails us little. More, because the reagents are so expensive, it is uneconomical to do the tests. Conventional PCR nasal swab tests are expensive, costing "from $50 to $150" each. Mina states that such tests "often have sample-to-result times of 24-48 hours". In the real world of limited lab capacity, I have heard of delays of as much as eight days.


Because of the rapid acceleration of viral growth early in the infection cycle, a surveillance test needs to only detect a relatively high amount of virus. These tests should be cheap — cheap enough for everyone to use daily, and capable of being mass-produced in the billions.

The good news is that such tests already exist:


E25Bio, Sherlock Biosciences, Mammoth Biosciences, and an increasing number of academic research laboratories are in the late stages of developing paper-strip and other simple, daily Covid-19 tests. Some of the daily tests are in trials and proving highly effective.

The strips could be mass produced in a matter of weeks and freely supplied by the government to everyone in the country. The price per person would be from $1 to $5 a day, a considerable sum for the entire population, but remarkably cost effective.

The bad news is that the FDA still looks at this problem from the standpoint of regulatory certainties, and the understanding we had of disease mechanics back in March. In TWIV 640, Mina participated in the following exchange:


Michael Mina: ... [H]igh-frequency testing using a less sensitive test goes much further than low-frequency testing using the best test in the world. We pretty much found that if you test less than ... every two weeks, you're not going to be able to contain pathogens.... What I would suggest is we have really cheap, low-sensitivity, from a molecular perspective, low-sensitivity tests that are a dollar, that people take every day. And so then it doesn't have to catch you in your incubation period, it doesn't have to catch you 20 days later, it just has to tell you the morning of that you have enough virus that you could be transmitting.

Rich Condit: Do such tests exist? Or will they?

MM: You know, they do. So this is the other bit that really led to that. They do exist, and I've been advising a lot of companies on their reagents and their tests and their test characteristics that might be needed. And the most frustrating thing for me is that these tests exist, but they're all getting slammed. Especially when they look at what happened with Abbott IDnow getting slammed for having a sensitivity that's a few Ct values worse than PCR, which is nothing. If you have a sensitivity that gets you to a Ct value of 36, great, that's amazing. But these companies are shaking in their boots, saying we can't go to the FDA, we can't try to market this test yet, because its sensitivity is three orders of magnitude worse than PCR, analytically, on the molecular level. And so I've been saying this: the FDA and the CDC and the NIH have to change their messaging. They have to say, look, there is actually a technology — that a test could exist right now — I have some sitting in my office next to me — they're paper strips. They're just little pieces of cardboard printed with monoclonal antibodies that can pick up an antigen. Essentially a lateral flow assay, can be printed in the millions, and could probably be done by the federal government and be funded by the federal government.

Mina's faith in the FDA et al. to manufacture anything is suspect given the CDC's role in delaying a working test back in February, but the funding part is much more likely. This sounds promising, which means it will all but certainly be ignored.

No Concrete, No Foundation, Or, "Awareness" Is Not Enough

About a month ago, I ran into Shaun King's widely-disseminated tweet about voting response to police brutality:

STOP generically telling us to VOTE in response to all of the police brutality we have right now.

Yes we should vote. But we have to be VERY specific.

Democrats, from top to bottom, are running the cities with the worst police brutality in America right now.

This was, I think, the first sign of a possible awakening (and no, I don't think the Republicans are a particularly good answer here). The fact that these things keep happening in Democratically-run cities and states is an indicator that the rot is substantially more difficult to excise, and that the affiliations in multiple dimensions will make this harder still.

Forcing politicians to implement reform in the face of entrenched interests will require sustained political agitation, and an agenda of reforms to agitate for. This brings me to the subject of this piece, Black Lives Matter, the formal organization. It surely has been front and center in many aspects of the current crisis. Formed in the wake of the George Zimmermann acquittal in 2013, the protests of the Michael Brown shooting in St. Louis the following year garnered the nascent organization national recognition. But in that time, they have not set up a national 501(c)4. There is accordingly no IRS 990 history to analyze. The PAC registered under that name raised a grand total of $500, and has since been dissolved. As donations to BLM itself all go through ActBlue (itself a 501(c)(3) charity with over $1M in assets according to its 2017 990), there is no visibility to that money beyond what ActBlue provides. (At the time of writing, I have a request into that organization for BLM's finances, but have received only a robot response.)

You will seek in vain for actual policy at BLM's website. Their "What We Believe" page is a litany of sophomoric college intersectional babble, full of nonsense like

This is not terribly surprising coming from people whose founders in fact include actual Marxists. But nowhere there will you find a proposal for dealing with police violence against black people. BLM, the organization, has lost sight of the main goal everyone assumes they are after: the end of disproportionate police violence against black people.

Contrast this void with CHAZ/CHOP's demand list. Yes, they're silly. Despite the repeated assurances this isn't what the phrase "defund the police" means, they "demand abolition. ... This means 100% of funding, including existing pensions for Seattle Police." But at least, they provide a set of specifics. You could also look at the NAACP, whose strategic plan is full of airy nothings ("A chance to live the American Dream for all", "A free, high-quality, public education for all", etc.), but at least they point in the direction of goals. You can't fix what you can't identify.

This is in some way ironic, because only five years ago, BLM had actually launched Campaign Zero, which offered tangible and plausible ideas to stop police violence (h/t Coyoteblog). But that seems to have since gone nowhere. Campaign Zero's parent organization, We The Protesters, has a 2017 990 (the last year I could find) detailing $484,588 of support in that year, with no distributions over the period 2015-2017. But where are they? Has anyone heard from them, at all, since the George Floyd protests started? They have been a cipher. "Activist" groups like Black Lives Matter, at least the formal entity, have invested much in protesting and public displays, but show almost no interest in why police violence against black people is so widespread, nor in concrete solutions to fix that problem.

Update: I forgot to add this Washington Free Beacon piece about Shaun King sending money from Real Justice PAC to his own company.  While this is not, by itself, proof of malfeasance, it sure looks fishy.
Posted by Rob at 10:51 AM No comments:

The Childish, Utopian "Defund/Abolish The Police" Movement Will Fail

There are a number of silly, non-solutions being proposed lately, particularly police defunding. The Minneapolis City Council recently elected to disband their department, a futile and childish measure. Scott Greenfield's sensible take shows exactly what's on the line for the comfortable people making such demands:


But there will still be crime, because people will still be people just as they’ve always been people. Not every garage will be broken into, but some will. Are you willing to let it slide? Don’t call the cops as they won’t come. Don’t complain that they aren’t on the streets, as the twelve cops left on the force are busy busting stare rapists who are traumatizing strong and fierce women survivors.

How exactly this theoretical scheme that aspires to be “transformative” is supposed to work is anybody’s guess at this point. It’s not as if anybody has thought of any this through, and given the tendency to make word salad for dinner, it’s not as if their supporters demand specifics rather than meaningless vagaries about whiskers on kittens.

But Lisa Bender came the closest to spilling the beans when she told her constituents, flat out, that if they aren’t willing to take a garage break-in for the team, then they might as well wear Klan hoods. And if they break-in to your comfortable white privileged house after the garage has been emptied, who will you call?

There will always be simple, easy, wrong answers, and this is one.
Posted by Rob at 12:02 PM No comments: