The Strange Belief Of Male Mind-Reading

Apparently it's too much to expect women to actually ask their partners for help. 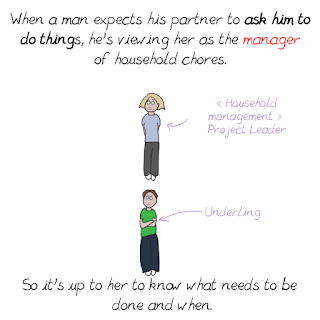 This aversion to communicating basic needs is really astonishing, yet I keep seeing it. A few years ago, I encountered an essay about harassment in the context of a daughter's programming class, the gist of which comes down to this graf:


I consulted with friends — female developers — and talked to my daughter about how to handle the situation in class. I suggested that she talk to you. I offered to talk to you [the instructor]. I offered to come talk to the class. I offered to send one of my male friends, perhaps a well-known local programmer, to go talk to the class. Finally, my daughter decided to plow through, finish the class, and avoid all her classmates. I hate to think what less-confident girls would have done in the same situation.

Yet of course, the one thing that arguably needs to be done is to bring it to the attention of the teacher.  In the original essay, that, apparently, had no place in the discussion; he was supposed to just figure it out on his own somehow, even if the abuse had happened outside of his knowledge. This is crazy*.

*It wasn't clear that this already happened when I first read the piece, before the second update appeared. In fact the daughter went to the teacher, who in turn went to the principal, who ... called the girl to his office and told her he wasn't going to do anything. Now, you can argue that's the wrong thing to do, that the teacher should have intervened — but it also points out a flaw in her response as well, to the extent that you won't always have someone around to stick up for you.
Posted by Rob at 8:46 PM No comments:

Harvey Weinstein's Colonoscopy, Or, The Hannah Arendt Award Goes To...

Bar none, you will not read a more compelling, honest, or damning story about what it was like inside the beast than Scott Rosenberg's Facebook essay, reposted at Deadline: Hollywood:


Simply put: OG Miramax was a blast.
So, yeah, I was there.
And let me tell you one thing.
Let’s be perfectly clear about one thing:

Not that he was raping.
No, that we never heard.
But we were aware of a certain pattern of overly-aggressive behavior that was rather dreadful.
We knew about the man’s hunger; his fervor; his appetite.
There was nothing secret about this voracious rapacity; like a gluttonous ogre out of the Brothers Grimm.
All couched in vague promises of potential movie roles.
(and, it should be noted: there were many who actually succumbed to his bulky charms. Willingly. Which surely must have only impelled him to cast his fetid net even wider).

He does not excuse himself:


So, yeah, I am sorry.
Sorry and ashamed.
Because, in the end, I was complicit.

Which is much less than Dan Rather's accusation that Rosenberg somehow snuck away from acknowledging his role in this.

Other linkies on this subject: