The pandemic will go on a lot longer than people are probably comfortable with, to the extent that the disease is likely to become endemic. And it's likely to drag on a while: Moderna has committed to making 1.4 billion doses of its COVID-19 vaccine in 2022, which suggests a couple of things:

For its part, Pfizer says they do not foresee strong demand for their COVID-19 vaccine in 2022, although they are similarly lining up for possible variant boosters, this mainly on the strength of many entrants to the market. Assuming Moderna is right and Pfizer is wrong, this could mean a COVID shot becomes an annual affair, like influenza. The good news, to a certain extent, appears that the virus is convergently evolving, i.e. the same mutations are showing up in different places. That is, we have a pretty good idea where the beast is headed. We also now know that the impact of the variants on T-cell reactivity is "negligible". Antibodies are nice, but they're not the whole immune system. In all, this makes it look like we're getting very close to this pandemic coming to an end.

The Pandemic Isn't Over, But It's Getting Closer

Coyoteblog (somewhat prematurely, I think) declares the pandemic over, at least in Arizona, this based on Arizona Department of Health hospitalization data. The obvious rejoinder to this is that we have previously seen downturns in hospitalization, but this time we have vaccinations. Arizona recently surpassed 40% of its population with one or more jabs, which the ADH boils down to 26.8% of its population vaccinated.

Costco may have quietly come to their own conclusions on this matter:

A sign that the end (of the pandemic) must surely be nigh. pic.twitter.com/YUf3LZdUUm

There's reason for hope. Hopefully next month we start seeing the large vaccine increases promised back in February. Of course, this won't help if we continue to see vaccine hesitancy in younger groups — or in ethnic groups otherwise disinclined to get vaccinated. This is already being chalked up to, in part, Russian disinformation (some of which is probably due to Sputnik V vaccine marketing). But none of this makes sense against the background of historical influenza vaccination uptake.

In the Kaiser Family Foundation's most recent poll, 51% of whites, 52% of Hispanics, but only 42% of blacks either had already been vaccinated or planned to get vaccinated as soon as possible. Yet, if you look back a ways — to this 2013 NIH study on influenza vaccination — you would see that whites lead inoculations in all age categories, with blacks trailing around 10% and Hispanics a similar percentage. As only 32.2% of whites 18-64 got inoculated in the 2010-11 season, that means about a 20-point shift in confidence and/or necessity. That's pretty impressive when you consider all the shade thrown at the vaccines as "rushed" or whatever other imagined flaws they might have.

The Coming Need To Sell The COVID-19 Vaccines

Dr. Scott Gottlieb recently tweeted something of great import about the COVID-19 vaccines:

"Everyone is going to be able to schedule appointments at some point in early April," says @ScottGottliebMD. "As you move down the age continuum you are going to see demand isn't as deep as it was for the older individuals--we are going to need to do more to stimulate demand." pic.twitter.com/NsY0kMpnp6

As we move from scarcity to plenty, we also move to more-averse age groups. A large cohort of people either refuse to get the vaccine at all (about 15% in recent polls) or will only if forced (7-9%):

This is not encouraging, especially considering there is a very large group that will not be able to get a vaccine for many months: children. As of February, Moderna is only testing their vaccines on children from 12-17, with the trial concluding "around midyear 2021", followed by a second trial of children aged 6 months to 11 years. Given children 17 years and younger amount to 22% of the US population, if you combine that with the roughly (and optimistically) 20% who refuse to take the vaccine under any circumstances, you're left with only 60% who will take the vaccine — far below the 70% needed for herd immunity (at a bare minimum). We had better hope a lot of those people get immunity somehow.

This sales job is not helped by the CDC's message that, even after vaccination, we will still have to mask and keep away from other people (emboldening mine).

"Currently, we do not have enough data to be able to say with confidence that the vaccines can prevent transmission," National Institute of Allergy and Infectious Diseases Director Anthony Fauci said last month. "So even if vaccinated, you may still be able to spread the virus to vulnerable people," he continued, and therefore you should continue to wear a mask and socially distance. Don't go back to normal, he advised, even after you've gotten the shot that is supposed to put things back to normal. In fact, we may still be in masks in 2022, Fauci added a few weeks later. Guidance from the Centers for Disease Control (CDC), expected to be released this week, strikes similar notes.

This is not how we should be talking about vaccines and the return to normalcy. However good the intent—and the intent is almost certainly to discourage reckless behavior that could undermine the vaccines' impact on disease transmission—the effect is discouraging and detrimental. Insofar as it might dissuade some people from getting vaccinated, advice like Fauci's might even be dangerous.

Getting vaccinated is a step — the biggest step — toward normalcy. It's too bad the CDC doesn't appear to see it that way.

The EU Campaign To Shame Vaccines Out Of The US

The ongoing fracas over AstraZeneca's ChAdOx1 vaccine and its sketchy trial data has not stopped its use in most countries. Indeed, as I learned today from Marginal Revolution, the New York Times writes that there's plenty of that vaccine in the US, whose manufacturing was started long ago (emboldening mine as usual):

About 30 million doses are currently bottled at AstraZeneca’s facility in West Chester, Ohio, which handles “fill-finish,” the final phase of the manufacturing process during which the vaccine is placed in vials, one official with knowledge of the stockpile said.

Emergent BioSolutions, a company in Maryland that AstraZeneca has contracted to manufacture its vaccine in the United States, has also produced enough vaccine in Baltimore for tens of millions more doses once it is filled into vials and packaged, the official said.

…But although AstraZeneca’s vaccine is already authorized in more than 70 countries, according to a company spokesman, its U.S. clinical trial has not yet reported results, and the company has not applied to the Food and Drug Administration for emergency use authorization. AstraZeneca has asked the Biden administration to let it loan American doses to the European Union, where it has fallen short of its original supply commitments and where the vaccination campaign has stumbled badly.

Given that the US has no apparent interest in using those doses, at least in the short run, this would seem like a reasonable request. However, there's an interesting detail in the Times story that merits further comment:

The European Council president, Charles Michel, said the United States, along with Britain, “have imposed an outright ban on the export of vaccines or vaccine components produced on their territory.” Asked on Thursday about the American supply of the AstraZeneca vaccine, Jen Psaki, the White House press secretary, told reporters that vaccine manufacturers were free to export their products made in the United States while also fulfilling the terms of their contracts with the government.

The link in that graf points to a remarkably self-serving and frankly nonsensical press release, claiming there would be

It's the third point that causes me to raise my eyebrows: if anything, the US is exporting vaccine to Europe. What else do they want? One expects this is a bid to shame additional doses contracted and paid for under Operation Warp Speed out of the US — at a bargain price. But as the EU itself shows with this point, doses go first to member nations — and only after local demand is satisfied will the rest of the world see any.

No, Israel Is Not Over 90% Vaccinated

If, like me, you had accepted at face value the marvelous gift of 91-DIVOC.com, you probably assumed all the figures there were taken directly from the underlying data sources, and that any errors were due to their sources. This led me to the conclusion that Israel has already vaccinated over 90% of their population. 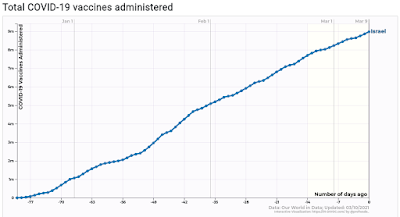 Unfortunately, it does not appear this is true. The Our World In Data repository at GitHub in their README.md file for country vaccination data says that the total_vaccinations field is 8,975,914 for 2021-03-09 — which is also the figure being shown on the graph above. Unfortunately, this field only tells us how many shots have been given, so a two-dose regime double-counts such individuals. When we use the people_fully_vaccinated and people_vaccinated fields, the graph looks like this: 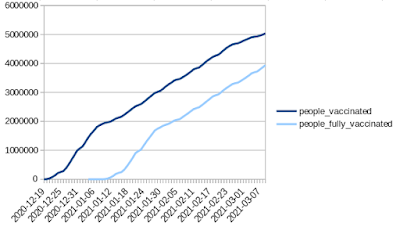 I've fired off an email to Prof. Fagen-Ulmschneider, and we'll see if he responds.

Update 2021-03-22: Much overdue, but the good professor back on March 11 acknowledged my contribution on his main page, and has made appropriate corrections.